Like Beer? Try some Bermondsey Microbrews and Craft Beers in London

Craft beers in London are making a surge onto the scene as of late, and Bermondsey microbrews are some of the best. Many breweries are opening up all around town. This isn’t your grandfather’s beer, as many unique flavors and combinations are being used to bring forward awesome flavors.

We’ve been to London 7 times now and going on one of these walking tours was always on our list. For one reason or another we never had the chance to experience it, but this trip we made it a point to do it. We paired up with our friend who is a food and beverage manager for a large hotel in the area, to have him show us where the best brews can be found.

Bermondsey has a “beer mile” that you can walk every Saturday at 12 noon, but there’s a smaller more intimate walk held on Friday nights. Not every brewery is open, but there’s still a large contingent to serve the needs of a Friday night crowd. We had planned to hit three places, but we had so much fun in our two stops that we never made it past the second round!

Our first stop was a great little place called BBNo, or Brew by Numbers. That night there was quite a lively crowd (around 25 people) and they were serving food as well. These breweries aren’t your standard breweries. Based under the rail tracks in Bermondsey, they make good use of the limited space that they have. Because of that, you’re not going to see much of a space between the brewery section and the customer tasting area. It’s all very niche, and I kinda like it that way! 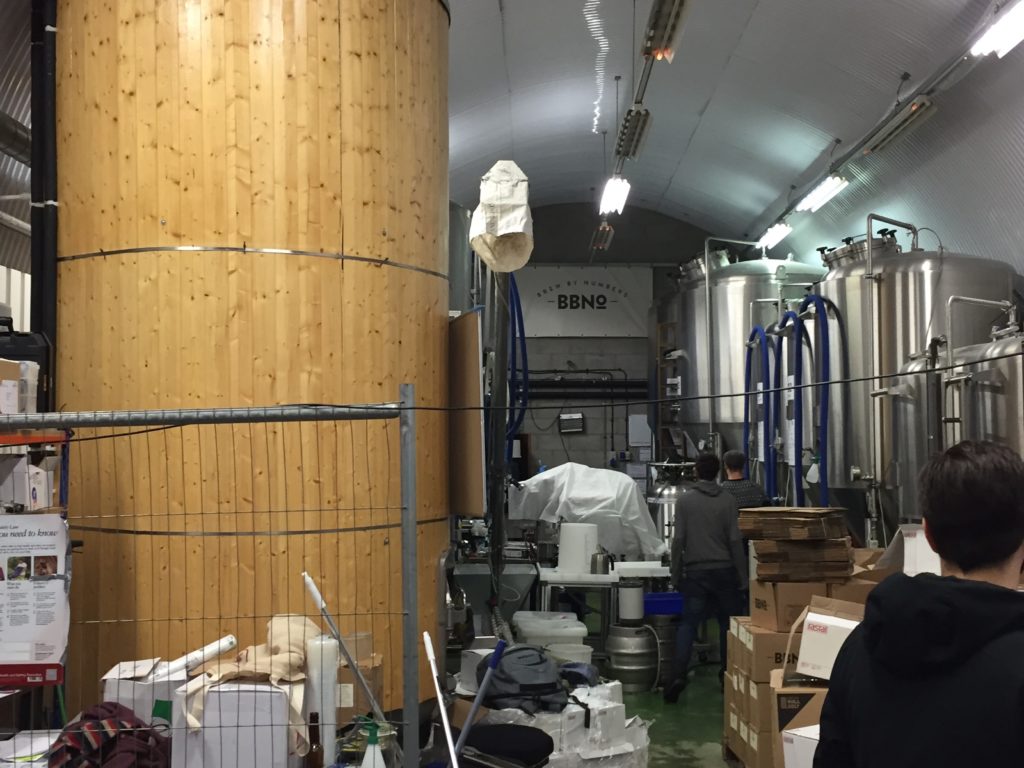 That night they had a “Salty Loins” special which was Chip and Jerk Pork Curry for only 6 pounds. Not a bad deal! I gotta admit, I was impressed! It was light, refreshing, and quite good. After about an hour (and two rounds) we headed walking towards our next destination, the Southwark Brewery.

This brewery was set up much like the other, with the “party in the front and business in the back.” There was a pool table at this brewery with a large seating area with communal tables. We were introduced to the owner / brewmaster who gave us a bit of a history lesson about the brewery and its beers. We tried three different varieties and were having quite a good time when the owner came up to us and apologized that he had to head out to his daughter’s birthday party, but we were welcome to stay and enjoy the beer. As it was after 10pm, they couldn’t sell anymore. So, what’s a group of 20 or so people to do when you’re in a brewery and the owner is gone? Well, it’s called a lock-in, and it’s exactly what you’d expect.

When the cat’s away, the mice will play. The lights went down, the music turned up, and it got rowdy and fun. The taps flowed freely and no one was charged for the beer. We ended up singing songs and playing pool for a few hours with total strangers. Before you know it, midnight was fast approaching and we had to head back before we turned into pumpkins. We had an early morning ahead of us with another friend arriving to hang out for the day.

As it was a Friday, the breweries are only open from 6-9 or 6-10pm usually, so you’ll get a few good hours in and if you’re lucky, you can get stuck in a lock-in! On Saturday’s they are open for longer usually from 11am or 12 noon until 8-9pm.

If you find yourself with some extra time on a weekend with no defined plans, make sure to get Bermondsey. You can find out about the area with some links here and here and here.