How you can Exchange Foreign Currency for Lower Fees

While credit cards are accepted now almost everywhere in the world, there’s often a need for cash when you’re traveling abroad. The problem that many travelers often run into is where to find said currency, especially without paying an arm and a leg to do so.

I want to focus on both the before-the-trip aspect and during-the-trip aspect, since many people still feel that you MUST have money on you when you travel (hot tip – you don’t).

No one likes paying fees when they don’t have to, so let’s run through some of the more popular options and find the best way to save you some cash.

Congratulations! You’ve landed at the airport and you’re on vacation. You’re realizing that you probably should have some walking around money, as my dad called it, and you’re lost like a deer in headlights.

You see money exchanges, ATMs, and even people offering you to do an exchange. You might even think that your hotel has your back. Let’s hit a few of the most popular avenues and dissect some of their fees. Every port has one. A Travelex or other money changing booth. You’ll see a table of foreign currencies with buy sell signs in red letters, and it can all get a bit confusing.

Some might even try and entice you with “no fees!” but you’re smarter than that, right?

These are ALWAYS the worst places to change your money, as the exchange rate will be less that favorable and while you might not have an exchange fee you could encounter other fees like service fees and transaction fees that limit you savings. 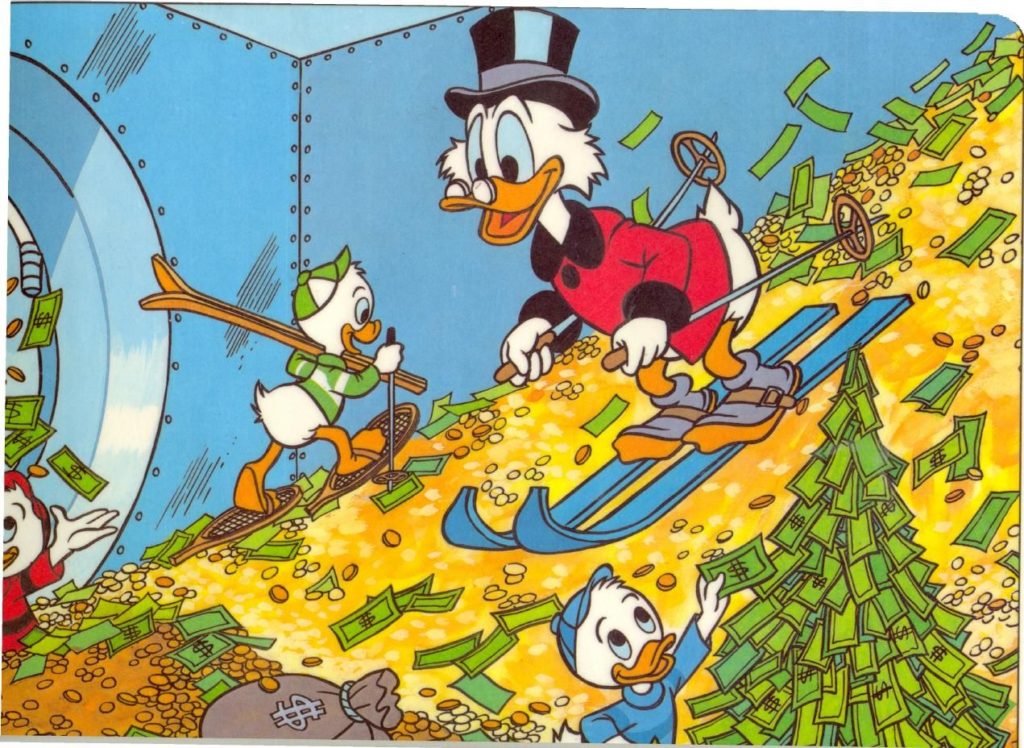 Ok, maybe it’s not this much money but… (image courtesy of The Walt Disney Company)

Your hotel might even offer you the chance to change your currency, and you figure this is a safe option, right? No worrying about heading out to find someone on some shady street corner to change your money.

The problem? Hotels know that, and will usually charge an unfavorable rate because of it. If you’re in a pinch and want to exchange just $5/10 US, that’s not the worst, but if you’re doing anything in a larger quantity, you’ll need to avoid your hotel.

Winner winner – the ATM is going to, in almost every circumstance, be your best bet for getting foreign currency on the road. Another option is looking into an account like Charles Schwab or SoFi. We use SoFi because they don’t have any fees at ATMs worldwide, no foreign transaction fees, and the accounts are free. You actually get $25 for signing up for the account (I mean, that’s a no-brainer).

Just use the ATM card wherever you are in the world and voila, no more fees.

If you’re not feeling the SoFi game, then contact your bank. You might find that they charge a 3% fee for foreign transactions, but it’ll almost always be less than the service charges you pay at the ports of entry.

So, you’re in the camp of “prepared is better, I’ll bring the cash with me,” right? And I can’t convince you that you don’t need to do that? Well, fine… here’s some options you can hit before you go.

Back when I used to work in finance, we had access to over 90 currencies within a two-day period. If you needed money fast, we could get it for you. There was of course no “fee” for doing so, but we would give you the “prevailing rate.” Travelex Currency from the Guardian.co.uk

You can guess it, but that “prevailing rate” wasn’t anywhere close to the actual exchange rate. It typically involved a 4-5% surcharge over the actual fee. The uptick is that you could get anything from Bahraini diner to Zambian Kwacha.

If you feel more comfortable, get $20-40 in local currency and then get the rest when you get there out of an ATM.

Chances are you’re going to have currency left over after the trip. Remember that most banks won’t take coins, only bills, so if you come home with a pocketful you’re out of luck.

What I like to do before leaving the country is settle my hotel bill with all the local currency that I have and then pay the rest with a credit card. At least that way I know I’m getting rid of it. The looks of the cashiers when I tried to pay with a bunch of 1 euro cent coins was priceless…

If you come home, you can go to your bank and give them back the currency. Guess what? They won’t charge you a fee, again, but once again you’re going to pay a bad rate to give it back to them. Banks are, after all, a business, and you’re the customer that needed the currency, remember?

The Moral of the Story

Take a few small denominations with you in case you need a tip or something at the airport, for every this else, there is the ATM. Use SoFi, Schwab, or another fee free bank if you have it to get all your ATM fees waived, and enjoy your trip!