Hotel Breakfast is BACK and Worse than Ever Before

So you’re getting back out there and you’re traveling again, right? You’ve been cooped up during Covid just like everyone else in the world. Things seem to be returning back to normal, and so what better time to travel.

You’ve booked your flight and your hotel; you even chose a hotel with free breakfast (maybe even free HOT breakfast) and remember the way things used to be.

When you wake up the next morning, you go down to breakfast only to find hoardes of people fighting, Hunger Games style, over the last saran wrapped bagel and soggy oranges. What looks like an Eggo French Toast stick has been discarded alongside the Froot Loops and 3 ounce Yoplait yogurt.

There’s no milk, there’s lukewarm coffee, the orange juice is warm, and the bananas are as green as grass.

Sound like some dystopian nightmare out of a movie? Nope, it’s just hotel Breakfast in 2021 during Covid 19. Breakfast may be back, but It’s worse than it ever was before.

Let me just give you a few examples of our recent travels so you can get an idea of what we’re talking about.

One thing I want to point out is that I never have been nor will I ever be a fan of the United States breakfast buffet. I find it to be one of the most wasteful and disgusting things hotels have ever done.

People gorge on food as if it’s the only food they’ve ever seen, you’re sharing the same utensils as dozens of other people, and let’s be honest, pouring waffle mix out of a dispenser and scooping SOLID scrambeled eggs with a soup ladel was never my thing. But just because you don’t have a buffet doesn’t mean you need to skimp on the service. It is possible to have a good breakfast service without sacrificing quality.

This was one of the better options I’ve seen. They had fruit, muffins, pop tarts, oatmeal, yogurt, milk, granola bars, and juices. The coffee was refreshed often and had tea as well. For a breakfast on the go, this was right about in line with what I could expect. Here’s an example of a hotel that’s making an effort to TRY and get a good breakfast out there. Also, when you’re in Miami, you should always go out and get a Café Cubano for $1. There’s no reason not to! Dear Lord – what happened? What happens in Vegas stays in Vegas, I get that, but this breakfast is something I would not wish upon my enemies.

Milk and Yogurt – fine. But the yogurt was left outside with no refrigeration, so it was warm, along with the milk. No cereal, no yogurt, literally apples and oranges. There was ONE bagel available which was half unwrapped. And the hot option was an overcooked sausage disc (I’m not going to say patty) and dried burnt carbohydrate sticks. I refuse to call them French toast sticks, that would be too kind. We left immediately for the refuge of a Starbucks.

Here’s the saddest I’ve seen so far. We stopped here and were excited to see the “hot cooked to order breakfast,” but what awaited us?

Warm cans of orange and apple juice, a steel tray of oranges, and that was it. No milk, no cereal, no yogurt, no bagels, no toast, no peanut butter, no nothing. No granola bars, nothing to take with you.

I finally found someone and asked if there was anything hot, and he said that he would go “reconstitute some eggs.” What the hell does that even mean?

Here’s a hotel that’s trying hard, and I really appreciate it. They went with a full on breakfast “buffet” served by staff in the back. They had hot options and plenty of cold options as well. The only real downside here was that nothing was available to take with you as they prepared everything for you in the kitchen.

I’m not even going to say much about this lovely “sausage and cheese biscuit” as the hot option. I’ll let the :90 seconds in the microwave and the picture say everything that I don’t have words to describe. The Exception to the Rule – Andaz Maui Wailea

We did manage to find a hotel in our travels that fully exceeded our expectations. As with everything there is one hotel, chain, or property that stands out above the rest.

The Andaz Maui went with a full breakfast platter, and during our stay we could order directly from the menu whatever we liked. I’ll let the pictures speak for themselves, but this food was out of this world. I suppose this is just an example of how a higher end property treats their guests.

We have been on a few international trips so far, and it doesn’t look like the trend in bad food has expanded overseas… yet.

In Hamburg we had an acai bowl and waffles In Cologne there was a full breakfast buffet, german style (meats, cheeses, Muesli, and more) 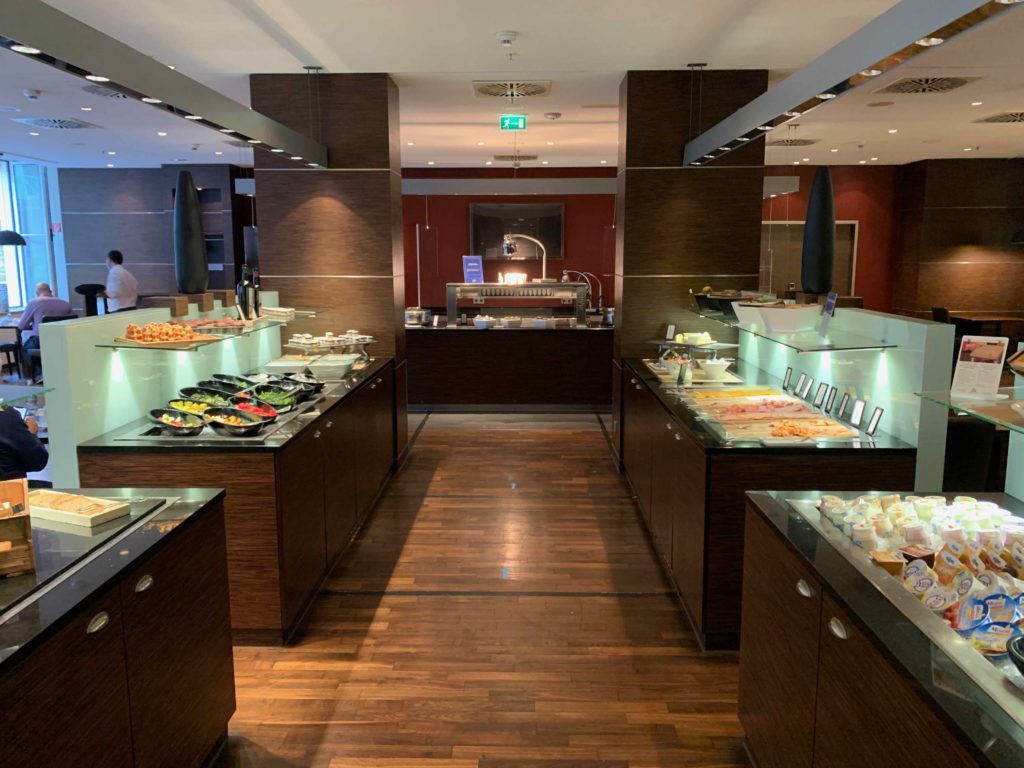 And the Waldorf Astoria in Amsterdam brought us a literal tower of delicacies every morning. If you’re going to a hotel for the breakfast, or if you think you’re going to get a quality breakfast from a mid-tier hotel, think again. The excuse of “due to the pandemic we don’t have milk” just simply isn’t going to fly anymore. Travel is back, travelers are back, and they will demand and expect a certain level of normalcy, lest they take their money elsewhere.

Remember that there’s always a local coffee shop nearby for you to give your money to, or perhaps get a free doughnut from Krispy Kreme if you’re smart enough to have had your vaccine already.