A day in the life of Male, Capital City, Maldives Review

Male is a bustling city, the capital of the Maldives with over 130,000 people. In fact, it’s one of the most densely populated islands in the world. We decided that it wouldn’t be a trip to the Maldives if we didn’t at least hang out here for one night to get a real experience for the island life. Upon reflection after the fact, we probably should have just gone straight for the island.

Our flight from Abu Dhabi landed at 2pm, which meant that we COULD have taken a SeaPlane to our resort right then and there if we wanted to. Seaplanes only operate during daylight hours, so any flight that arrives late in the day would have to spend a night here forceably. We just decided to give it a go and see what flavors the city could whip up for us.

Mention the Maldives and images of pristine turquoise blue waters come to mind. Overwater bungalows with direct jump-in access to the water and romantic sunsets are commonplace in this island paradise.

While it’s on almost everyone’s wish list, getting there can be a challenge. Flights are often ridiculously expensive and once you DO get to the islands, a barrage of expensive hotels with overpriced meals await. Never mind the flight distance involved, those expensive factors are enough to turn some people off and have them looking for cheaper destinations. 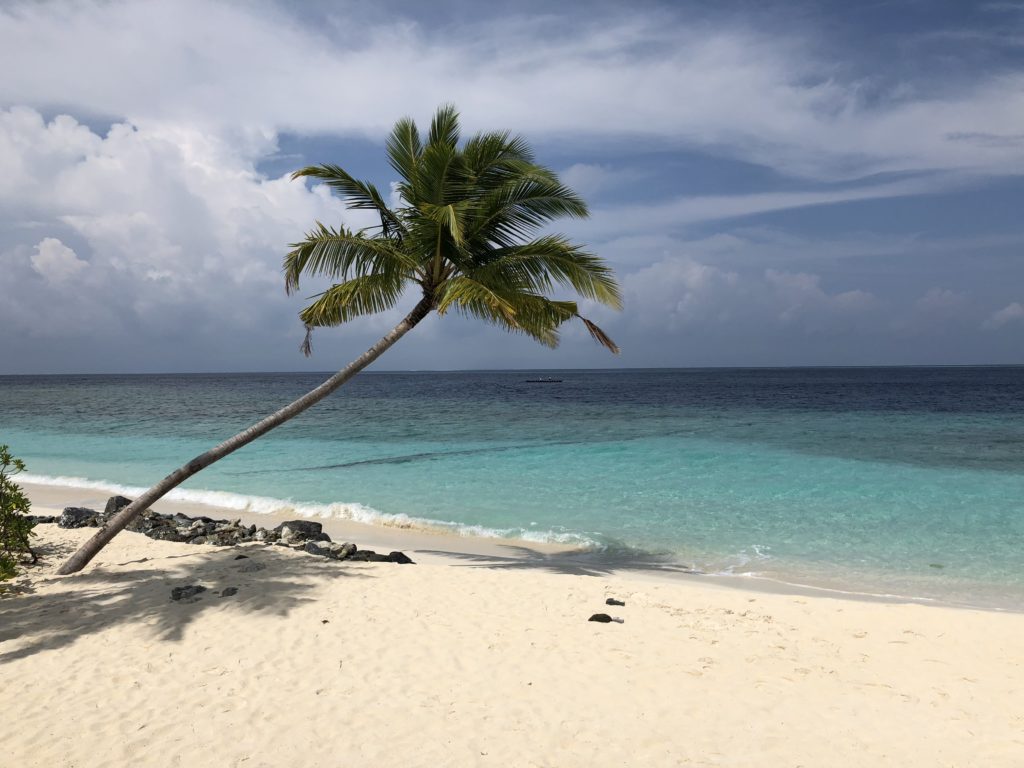 Getting to paradise and back doesn’t have to cost a fortune. We booked a ridiculous, normally unattainable luxury vacation valued at almost $46,000 for a grand total of $1,818… for two people!

Considering that’s usually the price of a regular coach class ticket to the Maldives, that’s one heck of a steal.

In the series of posts to follow, we’re going to walk you through all the experiences that we enjoyed on this trip. While most people would consider this once-in-a-lifetime, with just a little legwork and dedication you can have a luxury getaway to make Instagram followers drool with envy.

The City of Male

We decided to stay at the Hotel Jen Male (which we will review separately) mostly because it was the offshoot of the Shangri-La brand. Just like Marriott has Fairfield and Sheraton has Four Points, the Shangri-La family has the Hotel Jen. It was a quick (and free) 7 minute speedboat ride from the airport to the hotel, and it was definetly speedy. The driver made short work of the distance between the airport dock and the city jetty. Once we settled into the hotel we asked the front desk if they cold arrange a walking tour. We’d love to see the city. No problem at all, they’d have someone downstairs waiting for us in one hour.

Male itself is a very condensed island. The majority of the interesting sights are all concentrated around the north center part of the island with a few others around the east and west road.

This map gives you an idea of the main sights, and just how close and walkable it all is! Next, the old cemetery with the remains of the former leaders from the country’s history. It truly is awesome to see these old graves in the condition that they are. Next, the memorial to November the 3rd. On November 3rd, 1988 there was an attempted overthrow of the government, and there is a memorial to those who were lost in that battle. The Mosque is next. To give you context, the city holds 130,000 people and on Fridays this mosque sees 60,000 of them. They are literally packed in shoulder to shoulder on top of one another for the prayer service. Getting a little bit peckish, our next stop was to the fruit, vegetable, AND fish market. Sure, because putting those things together sounds like a fantastic idea. We got to see some amazing specimines of fruit and vegetable, even some local Maldivian almonds. Samples all around for everyone! The fish market was bustling with people as the fresh catch had just arrived. Tuna was laid out as far as the eye can see. Once you select your tuna, you can take it over to a man who will clean, gut, filet, and prepare it for you, all with the precision and speed of a ninja. Truly impressive. Here’s a quick timelapse of us trying to cross the street. It was rush hour, and it obviously was NOT going to happen anytime soon, so we just kept walking with the traffic. After all, the island is pretty small and everything is 20 minutes away from everything else.

As we came back to the room, we found this lovely cake waiting for us.

I’m wondering if Birthday was translated into Anniversary? Nonetheless, it was a great touch. The next morning, still jetlagged as F, we decided to go back to the fruit market and get some bananas. At a staggering 10 cents each, we knew we were getting a bargain. The days shipment of coconuts was also arriving to the island and people were clamoring for the freshest batch. Walking around in search for some cheap and tasty delights brought us to the Alcyon Bakery. Just a three minute walk from the hotel and we were in store for some of the tastiest and freshest pastries around. For only $2.71 we got a donut, a fish bun,  a mango turnover, and a sausage roll… EACH. That’s $1.35 for each of us for breakfast. Sure was a lot better than the $18 dollars each the hotel wanted to charge. We headed back to the room, showered, and waited for the speedboat transfer back to the airport.

I enjoyed the time on Male. I always like seeing the local side of things when I go to a new country. Sometimes it can be so easy to slip into a resort and forget that there are people going about their daily lives on the island. With that said, I’ve been on plenty of trips where we’d seen “the local culture” before, and considering that we stopped off in London for a day AND Abu Dhabi for a day, I think that next time I’d just book straight through to the resort. Mind you, if your flight arrives outside of the hours for travel on seaplane and you don’t have a choice, by all means, enjoy a night out in the city. Otherwise, get the vacay started earlier. Afterall, that’s why you saved all the miles and the points anyway, right?

Has anyone else stayed in Male? What have your impressions been?